The North of England Wedding Awards recognise businesses in the wedding industry which go the extra mile for their customers, providing outstanding service and inspiring their customers to want to actively and positively promote them. Each year, hundreds of companies enter into the awards. Votes are submitted in their thousands. From these votes finalists are created, and the winners are normally announced at York Racecourse. This year, Charlotte Elizabeth Photography scooped Best Photographer. Here, Charlotte tells us more about the night...

"This year I can say that I am a North of England Wedding Award winner in the Yorkshire Photographer category. There were so many amazing photographers in the running this year, it was a complete shock when my name was called out on the night.

"I've entered a few different wedding awards over the years, but this one is my favourite. It's free to enter – the only cost involved is going to the awards evening (which is optional) – and it's fair. The judges take into account the comments written by couples as well as the scores given, which means that if all the photographers entered shoot a different amount of weddings, we all have an equal chance of winning.

"I'd decided to attend the awards ceremony before I found out if I was in the finals. I hadn't attended before, but from the events I'd seen it was a great atmosphere and a good chance to network and celebrate with other businesses in the industry. It's not often that a relaxed event with so many different wedding businesses happens. My Mum was the obvious choice to come with me; she was a rock when I first set up Charlotte Elizabeth Photography in 2013 and came to almost every wedding fayre with me. We also have the same taste in wine, so she's a great person to share a bottle with. When the finalists were announced I was so happy to see that I was one of them.

"At the drinks reception she asked what I'd do if I won. I told her then that I wouldn't be a winner. There were so many amazing photographers in the finals that it was unlikely that I'd be voted 'the best'. I also told her that I'd already got a lot of traction on my social media from simply being in the finals, and that I was mostly looking forward to seeing the comments from couples so I could improve my business next year.

"When my name was called as a winner it took a few moments for me to realise what had happened. It was my Mum who stood up first and pulled me up for a hug – I think I'd have sat there all night. The rest of the evening I was on a complete high. After the awards ceremony had finished, winners were asked to go for an official photograph in front of the branded banner. From there we danced, used the casino tables, got the best photos in the photo booth and enjoyed the atmosphere of the evening."
www.charlotteelizabethphotography.com

Still looking for a Wedding Photographer? 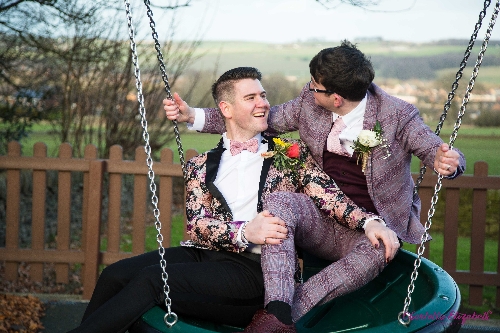 Margaret Dabbs London invites you to join the festive spirit with their Christmas Boutique filled with a wonderful...

TWIA is the well known regional and national client-voted awards in the UK wedding industry. It was established back in 2011...

The Good Hotel Guide (https://www.goodhotelguide.com/) has revealed its annual list of 12 César winners with Morston...

Fox & Butler – purveyors of luxury greeting cards – has unveiled its new collection of notebooks, journals and...

Inspiration from our great team of Editors at County Wedding Magazines!

To help you find inspiration for your big day, take a look at what's caught the eye of our editors.

There are literally hundreds of ideas, products and services from wedding suppliers across the UK along with links to their web sites as pointed out by our ever resourceful team.

Take a look at what our Editors Love!